The 2021 Nicol-Brown Judges in Concert
by Video!

Members of the piping community from around the world joined together virtually on October 8 for an exceptional evening of music by
Roddy MacLeod, MBE from Glasgow, Scotland
Bob Worrall from Burlington, Ontario
Jenny Hazzard from Edinburgh, Scotland
and Nick Hudson from Houston, Texas.

The concert will remain available on demand on the Facebook page, and is now posted on YouTube. The concert is presented by the Nicol-Brown committee as a benefit for the continuing mission of encouraging amateur piping. 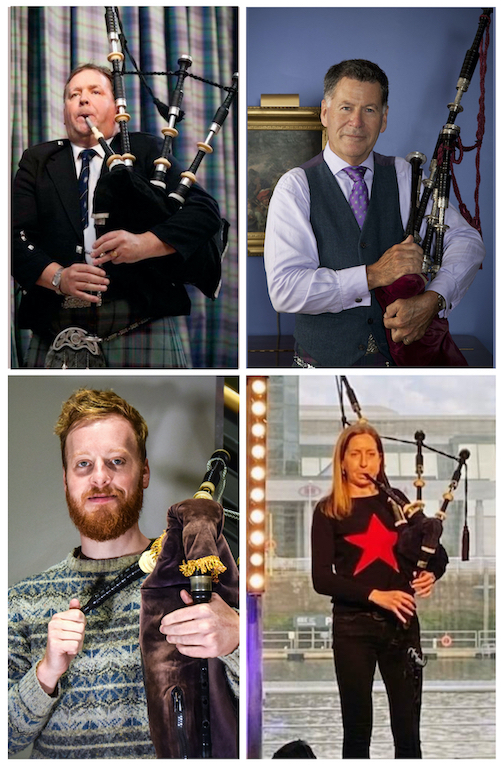 Host a watch party with your friends!

The concert video premiere was streamed at 7:00 pm Eastern Time on Friday, October 8 on the Nicol-Brown Facebook page, thanks to our four judges, and our production team of Andrew Douglas and Eric Ouellette, who all gave generously of their time.

The concert video is now posted on YouTube and will be available on demand for watch parties.

Jenny Hazzard has been a competitive piper in solos and pipe bands for over 30 years. Her solo successes in North America include the Gold Medal MSR at Maxville and the Metro Cup in New York. She was a member of the Newmarket Pipe Band and Glengarry Pipe Band before joining the 78th Fraser Highlanders in 1992. She was involved in several recordings with the 78th, including Live in Canada, Live in Scotland, and Flame of Wrath. In 1999, Jenny moved with her husband Colin MacLellan to Scotland. Jenny joined the Lothian and Borders Police Pipe Band, with Colin as Pipe Major, and enjoyed competing with the band and at solo events around the games and at the major events in Scotland. She won the Silver Medal at the Northern Meeting in 1999 and has had several prizes in the A-grade MSR and the Jig/Hornpipe and Jig at Oban, Inverness and London. After playing with the Spirit of Scotland Pipe Band for its one-off World Championships performance in 2008 then again for its only full season of competition in 2016, Jenny joined Field Marshal Montgomery, winning the UK Championships in 2017 and the World Championships in 2018. She remains a member and is looking forward to the band being able to play together again, post-pandemic.

Nick Hudson teaches piping at St. Thomas’ Episcopal School in Houston, Texas and plays in the St. Thomas Alumni Pipe Band, recently winning the Grade 2 World Pipe Band Championships and promotion to Grade 1. He received a BFA in Music Performance under Jimmy McIntosh and Alasdair Gillies from Carnegie Mellon University. Performance highlights include winning the Braemar Gold Medal, the Silver Medal at the Argyllshire Gathering in Oban, the B MSR at the Northern Meeting in Inverness, the London Ram’s Head Snuff Mull for A-Grade Piobaireachd, twice the Overall A-Grade Winner at the SPSL Annual Contest in London, the Piobaireachd Society Canadian Gold Medal, the USPF Piobaireachd, a BBC Pipeline session, overall winner of The Livingstone Invitational, placing in the Oban Gold Medal and A-grade light music, and overall winner of The Metro Cup. Nick serves as the chair of the EUSPBA Music Board and is a member of the EUSPBA Judges Panel.

Roddy MacLeod, MBE is one of the most distinguished and widely accomplished pipers of his generation. As a soloist, Roddy won his first Gold Medal at the Northern Meeting in 1986, then the Argyllshire Gathering Gold Medal in 1988. He has won the Glenfiddich Piping Championship five times (winning the MSR three times and the piobaireachd event a record ten times); the Silver Chanter seven times; the Northern Meeting Clasp twice, Bi-centenary medal (1988) and Former Winners’ MSR; the Senior Piobaireachd at the Argyllshire Gathering twice and the Former Winners’ MSR twice. At the Scottish Piping Society of London Championship he has won the Bratach Gorm eight times, the Gillies Cup Open Piobaireachd nine times, the Former Winners’ London Medallion MSR five times and the Overall Championship eight times. Roddy is internationally esteemed as a teacher, adjudicator and recitalist and, for more than 20 years, his warm, strong-sounding 100-year-old Lawrie pipes have given immense pleasure to audiences around the world. Roddy developed his interest in pipe bands from a young age and played with the Red Hackle and British Caledonian Airways Pipe Bands, the last of which became the ScottishPower Pipe Band. In 1995, Roddy became its Pipe Major and, over the next decade, led it to over 45 Grade 1 championship prizes. In 2008, Roddy was involved in the formation of the Spirit of Scotland Pipe Band which brought together a group of elite solo pipers and drummers for one week. The band, with Roddy as its Pipe Major, played in Grade 1 at the World Pipe Band Championship and qualified for the final. A movie called “On the Day” documented the band’s preparations and performances. As Principal of The National Piping Centre from 1996–2020, Roddy was a driving force behind such significant initiatives as the development of the BA (Scottish Music—Piping), degree programme, the establishment of the National Youth Pipe Band of Scotland and the formation of the Piping and Drumming Qualifications Board. He was the founder of The CLASP and co-founder of Piping Live!, the Glasgow international piping festival.

Bob Worrall is one of North America’s leading teachers, adjudicators and performers. Bob is a respected composer, having published three successful collections of bagpipe music. He is featured on three solo piping recordings and was a member of the folk group “Scantily Plaid”. After a piping career with a number of Ontario’s leading pipe bands, including the City of Toronto Pipe Band and the General Motors Pipe Band, Bob retired from competitive piping in 1983. His solo accomplishments were extensive, both in North America and Scotland. He won the North American Professional Championship an unprecedented 7 times and the Ontario Professional Championship Supreme title for 12 of his 13 years in the professional class. He was also the 1977 winner of the March and Strathspey/Reel events in Inverness. A member of North American and the Royal Scottish Pipe Band Association’s judging panels, Bob has been selected to judge the World Pipe Band Championships in Glasgow on 14 occasions. For the last twelve years he has been the colour commentator for the BBC’s broadcast of the World Pipe Band Championships. He is a member of the Piobaireachd Society’s Senior Judges list and has adjudicated major competitions throughout the United Kingdom, New Zealand, Australia, Brittany and South Africa. Bob’s recent overseas piping ventures have included teaching and performing engagements in Zimbabwe, Australia and Italy. His M.C. skills have been called upon by the Field Marshal Montgomery, ScottishPower, Inveraray and District, and Toronto Police Pipe Bands.

The Nicol-Brown Concert, Contest, and Master Classes are made possible every year by donations from the EUSPBA and other generous sponsors and volunteers. We love our donors!

Ten of the finest Amateur pipers from across North America earned invitations to play in an elite solo competition consisting of three events: 6/8 Marches, Piobaireachd and MSR. The contest is dedicated annually to the memory of Robert U. Brown and Robert B. Nicol, the Masters of Piobaireachd. This year’s contest was judged from video submissions because of ongoing uncertainties for international travel.

THE AWARDS CEREMONY was hosted at noon Eastern Time on October 9 via Zoom, with registration required.

Complete results and links to videos of the winning performances are being posted on our results page.

Nicol-Brown competitors were given the privilege of receiving Piobaireachd instruction from Roddy MacLeod, MBE, and Nick Hudson, and Light Music instruction from Bob Worrall and Jenny Hazzard. Pipers at all levels were invited to register to attend the Master Classes as observers, and learn from the suggestions given to each competitor. Topics included musical expression, technique, and improving performances toward the professional level. Piping teachers and judges find the Master Classes especially valuable each year.

Admission to all of the 2021 Nicol-Brown virtual events was free, thanks to sponsorship by the Eastern United States Pipe Band Association and other generous members of the piping community.