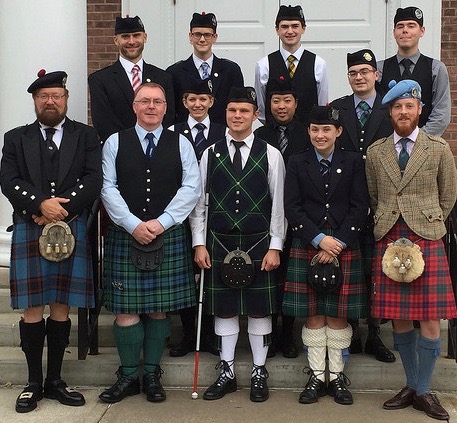 View a pdf of the 2016 program, with thanks to Kevin Wisehart.

View our collection of photos through the years or browse through our Facebook photostream.

Read the Nicol-Brown article, “Seriously Dedicated,” written by Nick Hudson for the Fall 2016 issue of the EUSPBA magazine, the VOICE.

This prize is a special recognition for the effort and thought put into the presentation of performances, showing respect for the contest and bringing dignity to the music.

Each competitor this year will receive a Nicol-Brown towel; a framed group photo sponsored by Barb, Erin, and Dan McCarthy; and the coveted Nicol-Brown lapel pin designed by Charlie Glendinning and sponsored by Steve Porter.

Invitations to the Nicol-Brown Competition each year are based on overall rankings and competitive results in the pipers’ home associations, as well as in national and international contests that show the highest standards of amateur piping for Piobaireachd and Light Music. An invitation is held each year for the Grade 1 Piper of the Day at The New Hampshire Highland Games & Festival, provided that piper competed in the Piobaireachd event that day. Nicol-Brown competitors pay their own way to the contest in Albany, or are helped with their travel expenses by their own sponsors and patrons.

Invited but unable to attend:

The 2016 Nicol-Brown Contest, Concert, and Master Class will be made possible by the efforts of many volunteers, donors and sponsors who are generous in their support of amateur piping. We'd love to add your name here: